Operational excellence in IT always seems to be an illusive goal. Attempts you’ll see will often range from the “magic bullet technology” projects that rarely deliver on expectations to the addition of crushing bureaucracy that is quickly circumvented and rendered ineffectual.

With these thoughts in mind, I was leery when I picked up a copy of The Visual Ops Handbook. Wow, was I ever surprised. The Visible Ops Handbook is a compact and highly effective prescription for achieving operational excellency. It won’t get you all the way to the promised land but it will send you down the path on solid footing. 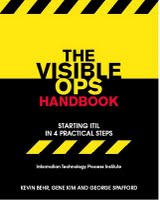 The approach is not about implementing new technology. It’s not about ivory tower bureaucracy. The Visible Ops Handbook is about bringing reliability, accountability, and predictability to your operations through a commonsense based process that doesn’t require heroic discipline or unrealistic political capital to implement.

Who should buy this book? The short answer is “everyone”. For a longer answer I’ll borrow a passage from the book’s introduction:

Yes, they are talking about you.

It’s a short read (100 pages including several appendices), so buy one for everyone in your department. Available in paperback from Amazon or as a PDF from itpi.org.

*Note: the full title is “The Visible Ops Handbook: Implementing ITIL in 4 Practical and Auditable Steps”. In my opinion the fact that ITIL is in the title is a bit misleading. There are some sidebar discussions that draw connections between the Visible Ops process and ITIL, but this is a book about how to succeed in operations first and foremost. I suspect the ITIL connection was made for marketing reasons. Don’t let it taint your opinion before you read the book.