The extreme example of Continuous Deployment that has sparked the most polarizing discussions is from Timothy Fitz’s posts on doing production deployment’s up to fifty times per day.

While it’s a fascinating read, many people for whom the essay is their first exposure to the idea of Continuous Deployment overlook the real value. The value is not how Fitz gets code all the way into production on a sub-daily basis. The value is in achieving a state of continuous automated testing.

If you understand the concept of “the earlier you find a bug, the cheaper it is”, the idea of continuous testing is as good as it gets. Every time a build executes, your full suite of unit, regression, user/functional, and performance tests are automatically run. In a mature operation this could quite literally mean millions of automated tests being executed every day. As your application development makes even the smallest moves forward, the application is being rigorously testing inside and out. 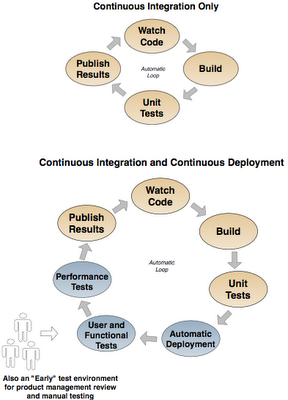 Another common misconception is that Continuous Deployment means that human-powered QA cycles are a thing of the past or are somehow less important. This belief is probably a byproduct of those extreme practitioners of Continuous Deployment who are doing hot deployments to production after every build. In most business scenarios there is not much benefit to continuous production deployment. The value of a human-powered QA team sensing if the look, feel, and functionality match the requirements can’t, and shouldn’t, be overlooked.

Most of our consulting clients just aren’t interested in sub-daily deployments to live production environments. What they want out of Continuous Deployment is to have a constant state of broad automated testing and an always up-to-date QA environment for human-powered testing and business review.

In addition to deploying a broad suite of automated testing tools, Fully Automated Provisioning provides the linchpin that makes Continuous Deployment a reality.

10+ Deploys Per Day: Dev and Ops Cooperation at Flickr Clouds, Virtualization, and Continuous Deployment all share the same achilles heal